The Digital Dream display at Kuala Lumpur International Airport is over 400 sq m and is supported by 10 media servers, a video processor, and 15 sending boxes.

“For many years, VGI Airports has been the advertising concessionaire for KLIA,” said Nacho Perez, chief digital officer at VGI Malaysia. “When the time came for the airport to upgrade, they decided to use the opportunity to develop a brand-new digital advertising platform.”

Located 34 miles outside of Kuala Lumpur, the international airport spans an incredible 100 km², and is one of the busiest airports in the world, with 62.3 million passengers in 2019. KLIA was designed and built as part of the MSC Malaysia plan – to create a high-technology business district in Selangor, Malaysia. Each phase of the KLIA project expanded the airport and boosted passenger numbers, with phase three, the final phase, designed to bring in over 100 million passengers, and continue to make the airport the largest and busiest in Malaysia.

“My role during this process was to lead digital development,” continued Perez. “Including selecting the locations to be newly installed or upgraded, identifying the right technology and suppliers for the installation of the screens, and also taking care of maintenance, and content delivery, creation, and scheduling.”

After an exhaustive planning phase, the team decided that a digital overhaul was required throughout the airport; following the flow of passengers from the drop-off area, through the check-in hall, immigration, and departures gates. A similar flow was needed in the opposite direction, from the arrival gates, through immigration corridors to the baggage carousels and, ultimately, the arrivals hall.

“From the outset, it was clear that digital was the only way to move forward,” said Perez. “It allows flexibility and precision, in order to display the relevant advertisements and messages to the right audience at the right time, using the right content.”

VGI decided to use a combination of LCD and LED technology, depending on the size of the screens and the idiosyncrasies of each location, and Perez’s primary choice for the latter was always going to be Absen.

“We only work with the best suppliers for every technology,” he said. “That means selecting each supplier based on a combination of quality, reliability, support, and total cost of ownership. Absen’s LED technology ticked every box for us and their customer service was second to none throughout.”

VGI Airports selected a combination of Absen N4, Acclaim A2719, and A2725 for the installation, split into three different areas. In the arrivals area, Absen’s N4 created the Digital Dream screen, an impressive 400 sq m LED wall that boasts a jaw dropping 23,976W x 1,008H resolution. Absen’s A2719 was selected for the Satellite Digital Impact Network screen to cover both the arrival and departures of international destinations. The same product was also used for full HD displays at a check-in area, while the Digital Arrivals Impact Network screen features a curved 7.3m x 2m (12 x 6 panels) A2725 LED wall strategically installed above the escalators for new arrivals.

Absen’s N series and Acclaim series are designed for permanent indoor display, and are perfect for use in a busy corporate, transport or retail space. At a slim two-inch panel depth, with a 1000 nit brightness and 8.8kg weight, the N4 boasts a vivid, lightweight display for all indoor requirements. With wide viewing angles and remote tracking, in which real-time performance tracking can be sent and viewed from a mobile, the N4 leant itself flawlessly to the airport’s requirements, while still presenting the sharp colour and brightness uniformity associated with Absen’s range of products.

“At Absen, we’ve always been committed to offering the best solutions no matter the customer, and in a critical environment such as this, quality, reliability and simple install products are key aspects to the correct solution,” said Ruben Rengel, Absen’s senior vice-president of global business development. “The N series, along with the Acclaim series, answered those requirements flawlessly, and the outcome of the hard work from the Absen and VGI teams was an incredible display.”

“LED allows us to build custom sizes to fit different areas and create some really immersive and seamless environments,” said Perez. “Such was our commitment to this, that we ended up building the longest LED screen in an airport.”

This particular LED screen, which is based in the baggage hall and known as the Digital Dream, measures over 400 sq m and requires 10 different media servers, a video processor, and 15 sending boxes to create a uniquely panoramic effect.

“We had a very good idea about what we were looking for,” said Perez. “We worked hard with the Absen technicians and engineers to make sure that the final result matched the brief.”

The advertising content is displayed using one Advantech or Dell media server per screen, with the exception of the Digital Dream, and is created by each advertiser’s creative team. Any internal airport communications and other advertisements can be created by the in-house team, if necessary.

“Our biggest obstacle during the installation was the fact that we were working in a functioning airport,” said Perez. “KLIA is open 24/7 and is used by more than 165,000 passengers per day (over 60 million per year). As a result, installing over 1,000 sq m of digital displays in more than 250 locations, without disrupting the service was a huge challenge. We overcame it by a deep and professional relationship with the airport operations team, primarily the engineering, security, and electrical departments. We also made sure that everyone on site during the installation, from suppliers to contractors, complied with the operating procedures as agreed with MAHB, the airport’s operator.”

He added: “Our technical team and the mechanical contractor in charge of the installation all received on-site training courtesy of Absen. We also had Absen technicians available to help, monitor, and check the products during the installation.”

VGI Airports ensured that the signage system would be reliable by including backup media players and sending boxes, as well as redundancy data cabling in case of failure.

The installation itself began in March 2019 and was completed by February 2020, just in time to miss the massive disruption caused by Covid-19. Although footfall has fluctuated drastically in the intervening months, the airport’s administrators and (perhaps more importantly) travellers have had plenty of time to marvel at its new look.

“Passengers appreciate arriving or departing an airport that is fully outfitted with digital displays,” said Perez. “As well as looking more modern, the messages they show are more relevant and dynamic than they were before. Moreover, MAHB appreciates the new installations as they help to revamp the overall perception and ranking of KLIA into one of the best in class in South East Asia.” 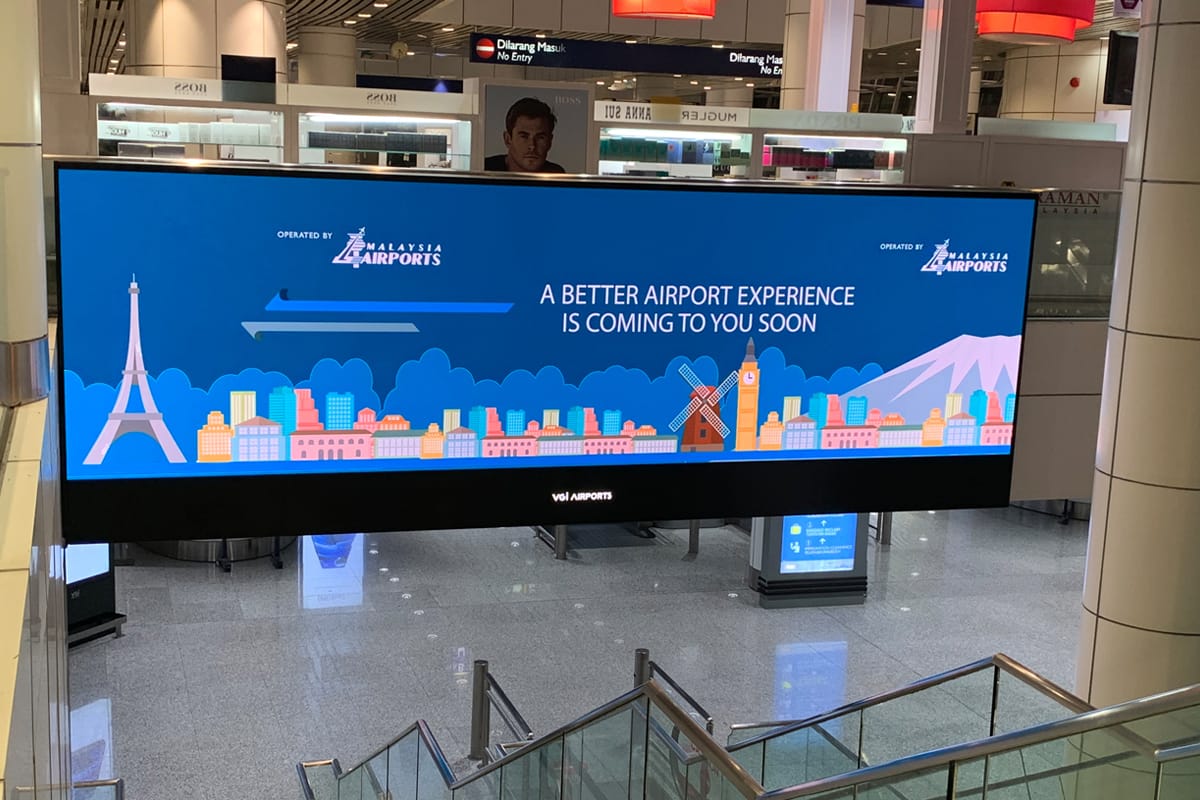